Nigerian author Chinua Achebe, who wrote "Things Fall Apart", the title was taken from a poem of W. B. Yeates, or as that Bushian buffoon, Donald Rumsfeld, said "things happen". Well, both have happened to me in Malaysia, as a result of Bangkok airport being closed for ten days and resulting complications to the whole of S. E. Asia, found me getting about ten days behind schedule. All possibility of me getting a boat from Singapore evaporated, its air fares were prohibitively expensive, when available. Kuala Lumpur, too, was in the grip of the fall out and also the time coincided with school holidays, so i retreated to Bangkok and said my prayers, which were answered, as i managed to get the proverbial "last seat" available on a budget airline, which took me to my objective, Melbourne. My overland quest had failed, however.

It has been an amazing adventure, especially after being grounded for five years, of people, places and explorations. The sense of freedom that i have gained has transformed my life and outlook. How i get back to "Old Blighty", is still an open question.

This is the occasion to thank all of my pals, who have been following the blog and especially those of you who sent emessages of encouragement and comment.

Have a peaceful and joyful New Year, 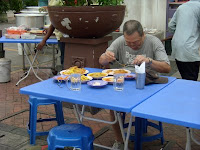 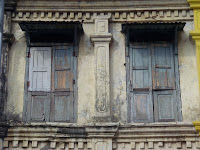 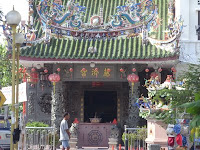 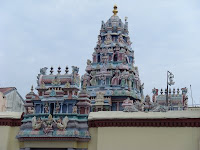 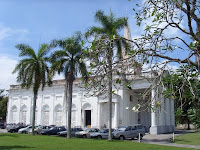 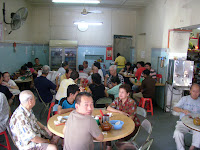 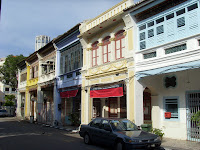 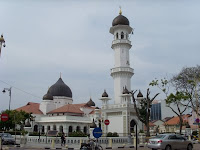 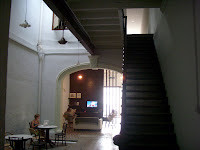 Georgetown is the oldest British settlement in Malaysia, dating from 1785, having grown in importance as a port because of the increase in the opium trade conducted by the East India Company, as it was on the route to China. In the local museum there are a couple of opium beds, which have porcelain headrests, so the stupefied addicts could still imbibe whilst lying prone.

It was my good fortune to meet Alan Chan, at the Old Penang Guest House, he is a Malayian Chinaman, also my age and a fellow "grumpy", so we got on splendidly. He is an enthusiastic gourmet on all the cuisines of the country, as well as being most knowledgeable on its history and especially the Chinese contribution.

Much of Chinatown is seedy and run down, but has a thriving and active Chinese community. A lot of the old shop houses are being renovated, they are most attractive and functional inside with long, wooden stairways and shutters, with high ceilings, which allow control of temperature without the need for air conditioning. Being with Alan meant every day was a new food experience, starting with dim sum in the mornings. Not only are there there a number of Chinese styles of cooking, such as Cantonese, Sechuanese and Hainanese, but also the other styles from Malaysia, India, Indian Muslim, and Nanonya, which is a style developed by Malay ladies who married Chinese, they developed a synthesis of both styles, using fresh ingredients, sweet and sour, bitter with herbs and spices. The Chinese restaurants were full of enthusiastic slurpers who chatted noisily. All the restaurants were utilitarian, if they modernised, Alan said, they would loose all their customers, as they felt they would have to pay.

Little India holds a significant community of Indians, it is as if one was on a different continent, with music, saris, tilak marks, and the aroma of curries and joss sticks.

A visit to the tourist beaches was also undertaken, but it was not an area of iconic interest as Georgetown was, which also has an English fort and cricket pitch, just to fly the flag. It was the place to be, just being still and chilling out in contrast to all the weeks of movement and change.
Posted by rob2oz at 19:44 No comments: 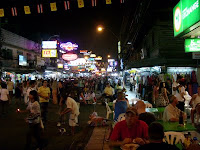 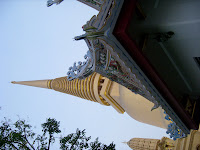 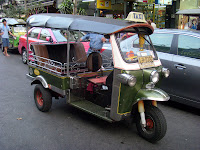 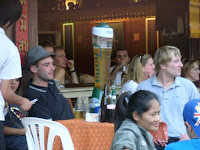 With a bucket in Khaosan Road 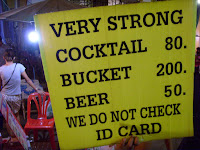 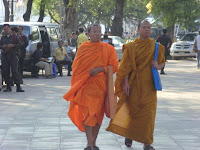 A very common sight here, in the Khaosan Road area of Bangkok (sleazy++), is really old chaps, my age, with a Thai nymph hooked onto one arm and a pocket of viagra, with a bemused look on their faces, hardly able to believe that their dreams are about to be fulfilled . Some faces looked quite familiar, but for a suitable kickback no names will be dropped. You may ask what i was doing there, well, someone has to do the sociological studies!

Khaosan Road is an area of all that us goody goodies tut tut about: loud music, drugs, money changers, stalls of bootleg cd's, dvd's, designer label clothes, 24 hour excess drinking, weirdos, cross dressers, tattoo lounges, food hawkers, even Rastafarian dreadlocks, unfortunately my hair is both too short and too sparse for me to have got it attached successfully, as i fully intended to go fully underground!

The heat here has found me low in the spirit of exploring further this city of 6 million. Just keeping up with reading guidebooks and talking with fellow travellers, to study the road ahead and to get up to date information, this takes a large part of my time. I am looking forward to getting on a train once again, this is my preferred method of travel. It is more akin to being on board a ship moving sedately, things coming into view and passing by slowly, while one continues in a straight line. You can read, doze, eat, read, chat, dream, walk about. I have not been on a train since leaving China. The alternative is like being driven by Toad of Toad Hall, braking hard, cutting in, dangerous overtaking, crushed together with others suffering the same anxieties, bumps and dust, as well as trying not to think about how long it might be before the next loo stop.
Posted by rob2oz at 23:06 No comments: 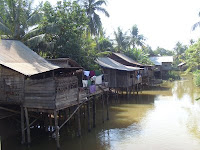 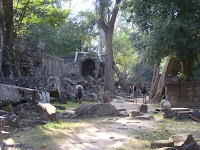 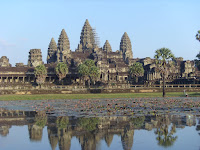 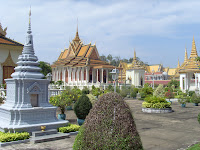 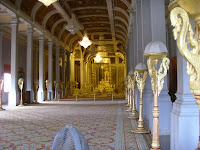 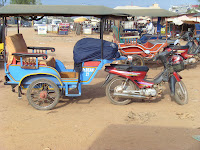 Now i have a new country to add to my favourites list. So peaceful and spacious after the claustrophobia of Saigon.

the country is dominated by the world's fifth largest river, the Mekong. Most houses outside of the big towns are built on stilts because of the massive and long lasting annual floods.

Phnom Penh has been the capital since the 15th century, when Angkor Wat was abandoned to the jungle. the Khymer people, who built the temples in the jungle, were the dominant power in SE Asia from the 9th to the 14th century. The country was sucked into the Vietnam War, after their war against the French and subsequently lost a quarter of its population under the Khymer Rouge led by Pol Pot ending in the terrible extermination that took place at "the Killing Fields", just 14km outside the city.

Now the city is relatively sleepy, spacious and captivates me when entering in an open-sided
tuk-tuk, passing temples, palaces and an avenue of franjipani in blossom. The country has largely been off the tourist map.

The Royal Palace and Silver Pagoda is the official residence of King Norodom Sihanouk. The latter is so called because of the 5,000 silver tiles that cover its floor; "no photos allowed", which was an open invitation to me. It also houses a life-sized Buddha in solid gold and decorated with over 9,000 diamonds, the largest of which is 25 carats.

After Phnon Penh the small town of Siem Reap, which is leafy and semi-slumbering, this is being changed by its proximity to Angkor Wat and the other jungle temples in the area. (Siem Reap means "Siam Defeated', not a good name to use close to the border with Thailand).

These temples are the pride and joy of the Cambodian people.

Angkor Wat is the world's largest religious building and a wonder of the world. It is over 150 feet high, with a vast moat surrounding it.

Angkor Thom, its former capital, has at its centre "the Bayon", which has over 200 huge faces carved on its many towers, each with an icy smile, no matter where you look one seems to be watching you, quite disconcerting. Ta Prohm, which has been left to the jungle, was used for the film "Tomb Raiders". 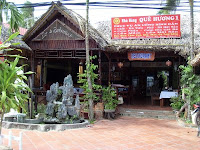 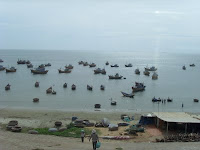 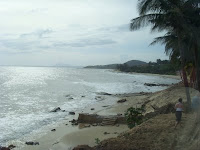 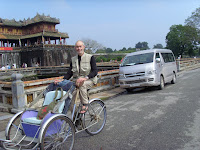 If you can't beat them, join them 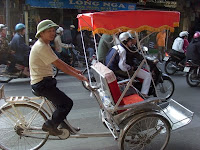 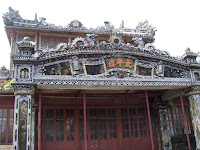 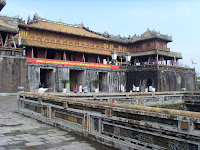 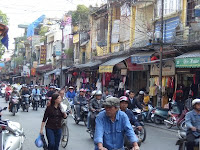 The Old Quarter, Hanoi
(see below for video)

Crossing over from China into Vietnam, by bus, is as visually contrasting as crossing over from the USA into Mexico. From spick and span Chinese PR into potholed, seedy and chaotic Vietnam. Yet, Vietnam seems more open, friendlier, as well as cheaper.

The houses are now tall and skinny, which, i suppose, can be expected from a small country which has a population approaching 90 million, most of which live along a coastal plain.

There are no electric bikes in HANOI, which has little electricity, instead the country seems to run on mopeds, millions of them. Pavements seem to be for parking upon, or for running a stall, the roads are a free for all between pedestrians, mopeds and cars, the mopeds win hands down, spooking one, from all directions, in the narrow streets of the Old Quarter, which is where i stayed on my last visit in 1993.

A further bus journey to HUE, which is a UNESCO World Heritage site. Formerly it was the political capital under the Nguyen dynasty and maintains its position as a cultural, religious and educational centre with a sedate pace of life along the Perfume River. Older tourists also seem to like HOI AN which is famous for its range of restaurants.

Beaches, fringed by waving palms, with all sorts of resorts, stretch all along the coast as far as SAIGON in the south, (which is a far nicer name than Ho Chi Minh City) (HCMC), this conjures up the French colonial past and where one still eats baguettes, drinks coffee and views fine mansions hidden behind the avenues of massive tamarind trees, which line and shade the streets. If the British had been the colonial power they would have left cricket and rules and regulations, which is still more than the Americans, who left bad feelings, munitions all over the country and a heap of soldier's dog tags heaped into a pyramid behind a glass case in a Hue museum.

Cholon, the Chinese part of the city, has a frenetically paced market selling everything, run by hundreds of very bright and beautiful chinese ladies.
The mopeds and cyclos dominate the city traffic. Riding pillion on one is an extreme sport, as dangerous as bungee jumping, or rock climbing without safety ropes.
Posted by rob2oz at 02:21 No comments: