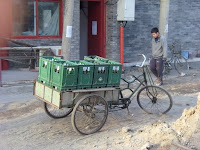 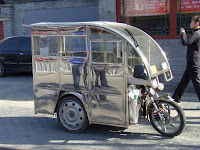 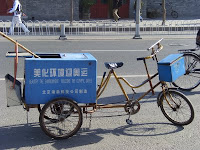 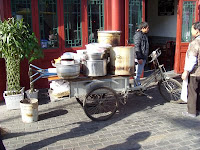 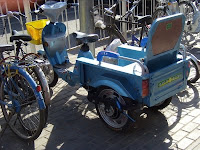 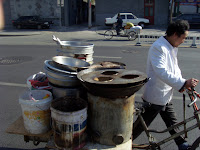 
Autumn has hardly reached here yet, the leaves are now only yellowing and it is only a couple of days past the US presidential election. Temps are still around 20, still, it is as if the bitter winter they get will never arrive, but when it comes it does so with a bitter vengeance.
The route in saw the field full of people and simple machinery harvesting maize and the vast apple orchards. The plain set between two parallel mountain ranges has many thousands of poly tunnels producing out of season green crops. There are thousands of new shiny pylons crisscrossing the countryside. Also, there were many new coal fired power stations, as well as many houses with solar panels on their roofs. China also produces 20% of its power from hydro schemes.
A first and lasting observation was the brand new taxis, their prices are low and better still all use their meters, speak some English and each ride the driver has to issue with an automatic printed out receipt, in case of complaint, or loss, this is in marked contrast to Moscow cowboys.
The Metro is cheap, new and efficient. Fixed fare of 20p for all distances. Note this Boris. New bendy buses, trolleys as well as a new form of taxi for me, electric tricycles, in fact electric bikes/trikes are taking over all sorts of traditional work horse areas of delivery and transportation. The streets are swept by an army of cleaners all day and evening. So, the usual culprits, that us grumpy old men have to endure, are absent: dog shit, plastic, graffiti, and paper are absent, enough to put a satisfied smile onto my face.
silk shops abound, as so too do tea shops, think of the Silk Road and Cutty Sark. Huge shops that sell nothing but silk, or tea. Not a tea bag to be seen, or a jug of milk. Good tea does not need masking, the same as good wine does not need colas added to it. Being an enthusiastic REAL tea
fan i have been to many tastings and also bought many types too.
Posted by rob2oz at 20:23